Sit back, relax, and take a trip down memory lane with Hannah Guehria. 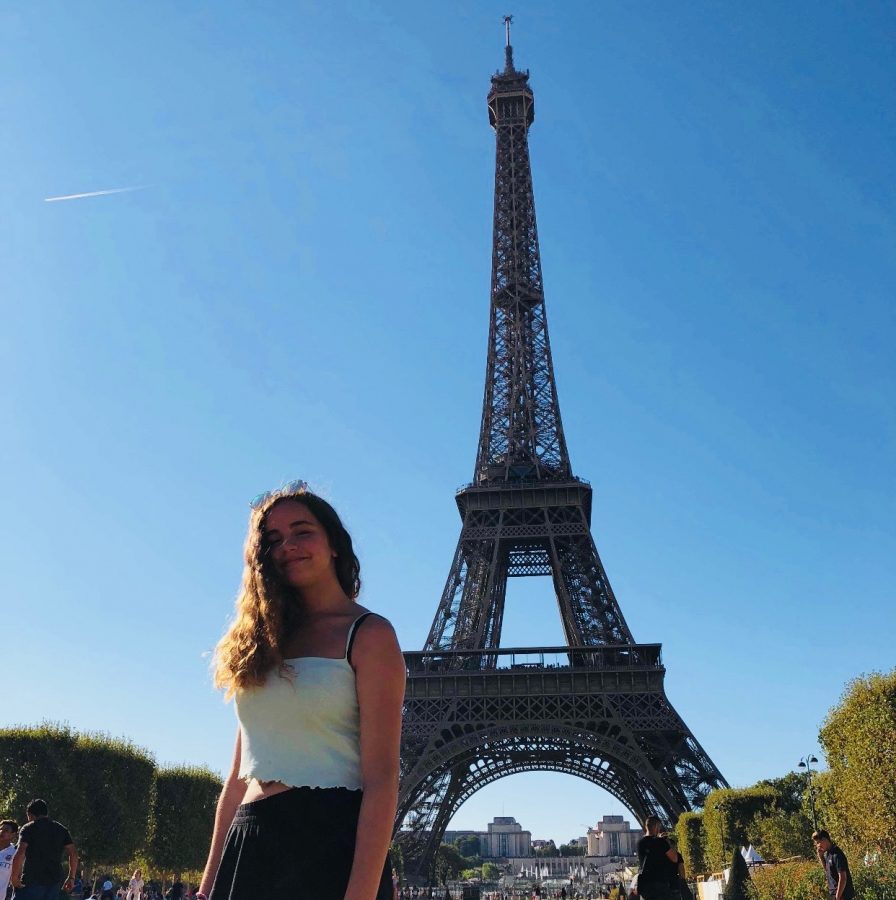 Guehria in front of the Eiffel Tower during her trip this past summer.

It just had to be a rainy, grey Saturday morning; Hannah Guehria hated rainy days. She’d much rather the sun be out so she could take pictures by the pool, or merely sit and watch the sun rise.

No matter, though; she appeared to be in a good mood, crunching on some chips while being bombarded with questions. See, Guehria comes from the city of Paris, France, and as a child, an environment like that just keeps you in high spirits.

This bubbly fourteen-year-old moved to America when she was nine and has been travelling back and forth between the US, Africa, and France ever since; she has family in the latter.

“The American [culture] I can’t really live, because my parents want me to keep my other two cultures. But I still live all of them when I [travel], and even when I’m here,” Guehria said.

Every summer, she spends one month in France, and the other in Africa.

“My family in France I am the closest with. I literally just went to Southern France with them and had the best time. And my family in Africa, I– I’m very close to them, but not as close as [my Parisian family]. My mom’s side is both in Paris and in Africa. And I’ve– I never visit my dad’s side, as much as… my mom’s. I haven’t visited my dad’s side in three years now. [They live in] Souk Arhas, it’s in Algeria. Near Tunesia.”

Guehria grew up speaking French and Arabic, not learning English until she moved five years ago; she reached fluency in 2016. Laughing, she admitted she never realized how difficult it could be to balance three different cultures until starting school in America.

Miss Ray-of-Sunshine has settled into American society nicely, though that trip overseas every year seems much needed. One of the things Guehria missed the most, she said, “Would be the lifestyle. Because it’s um, it’s what I’m used to. Wake up, take your breakfast, get out of the house, do whatever you want.”

“You don’t need a car, take the bus take the subway, you don’t need to have much money with you. I go see family whenever I want.”

Still downing chips, Guerhia described her favorite Parisian experience: “It happened this summer actually. Me and my cousin, her name’s Lena, we went to Montmatre. It’s a hill in Paris, and we went to the top and just watched the whole city.”

“That night, it was the semi-finals for the World Cup and France was in it. So we went to the Eiffel Tower and watched it with all the French supporters, and we won, so it was amazing. We were screaming with everyone and took the subway back home really late.”

She proceeded to describe a heart-warming memory from her recent trip to Africa: “My mom took us to her old high school where she taught at in the 1980’s. And it’s a hill too. And where we live over there we have the beach, so we went there and we could look at the ocean. And I love that, ‘cause I just love the ocean.”

If there was anything bad about travelling overseas every summer, Guehria’s list wasn’t long.

“Leaving, oh my God. I cannot leave correctly. I always cry, like it’s either on the airplane or in the car on my way to the airport. It’s like “oh my God, I’m leaving again?”