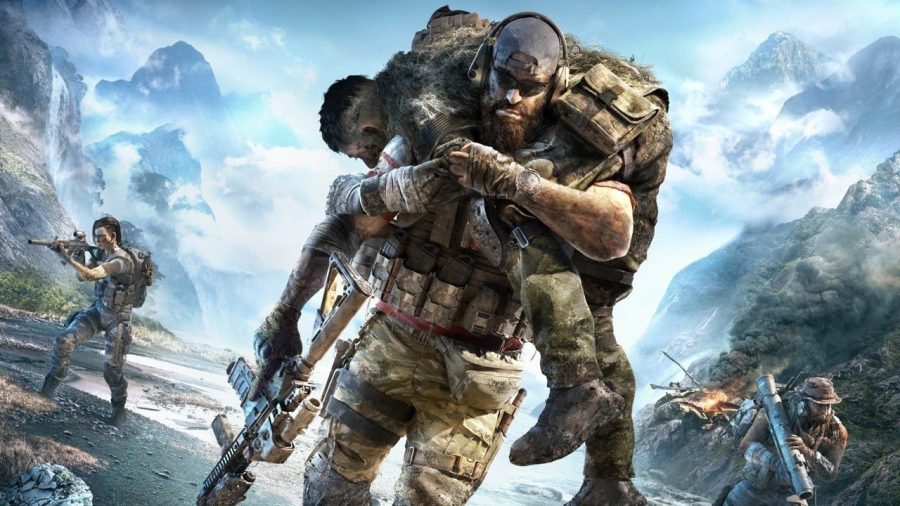 In this new game, we follow the tragic events that unfold on the fictitious island of Auroa. Our main protagonist, Nomad, is a Ghost, a fictional military unit sent in to deal with problems that traditional special forces cannot accomplish. This game will drag you through the nit and grit of the tragic story that is the Ghosts.

The island of Auroa is in the South Pacific and contains many different environments. The island is a beautiful combination of dense jungle, open fields, mountains, and of course the massive Skell Tech buildings in the background. These buildings are beautifully crafted to fit their environment. There are ugly and menacing military installations, small shacks in the woods, and massive high-tech factories and office buildings. Tucked away in this luscious landscape is a film set that has been taken over by a para-military group simply known as Sentinel.

Sentinel is a private police force hired by Jace Skell, the founder, and CEO of Skell Tech, and has taken over the archipelago at the behest of Jace Skell. This private police force isn’t even working to their own agenda, they work for The Wolves, led by a former Ghost, Cole D. Walker. The Wolves are all former Ghosts or special forces that have turned their backs on the particular country that they served. They are some of the most difficult enemies to defeat in the game, as they are the elite, the best of the best of what the triad of antagonists has to offer. This triad includes Cole D. Walker, a South African woman that enjoys torture, and the head of the Sentinels.

The main protagonist, Nomad, was a friend and colleague of Walker. Over the course of the game, Walker is fleshed out as a character and is given meaning, providing a backstory to his agenda. Like Nomad, Walker was a Ghost as well; however, Walker’s view has been tainted by the actions of superiors and some of his own men. Walker is now the head of The Wolves, a paramilitary group made up of special forces and more importantly ghosts.

In a cut scene, Walker stumbles in on an army lieutenant that has killed a civilian. After he confronts the lieutenant about his actions and gives him a stern talking down to, Nomad, also in the room, asks the lieutenant to hand over his weapon. The lieutenant gets into a scuffle with Nomad and fires two shots at Walker. The scene cuts to Walker as he looks at the bullet holes in the wall that could have taken his life and loses his composure. He walks up to the lieutenant and murmurs “I’ve had enough” and savagely shoots the lieutenant in the head with his custom revolver. This is the gradual unraveling of Walker into what he is now. This is the beginning of his downfall and what will lead him to eventually murder his fellow Ghosts in cold blood.

To eliminate Ghosts, you have to have a large arsenal. As a player, you have access to all the weapons that you can find. Weapons can be found on enemies that you have killed or crates around the map, note that the harder the enemies around the crate the better the rewards. As a player progresses through the game, the higher the level their gear gets. When you first start out you have frankly terrible gear, however, by the end of the first mission, your gear will already be starting to get better.

Having the best weapons is not the only thing you need to survive, having a cunning whit and keeping a very stealthy approach will certainly help get you through those harder compounds. Along with just basic crouching and prone positions, there are skills that you can unlock and equip to help keep you stealthy and unseen. Just skills will not keep you concealed, the clothing you wear will almost certainly determine whether you get spotted or not. The best clothes to wear are Gille suits, these are pieces of clothing covered in fake or sometimes real plant leaves and shrubbery. Just make sure to change the color of your suit, because spotting a bright white person on a luscious green hill is not hard.

Although this game has flopped at the game stores, it is still a great acquisition to anyone’s game collection. It has great scenery, inventive mechanics and gameplay, and great customization. This game should have done better if Ubisoft had held on a couple of weeks to fix it up and make sure everything was perfect.

Tom Clancy’s Ghost Recon Breakpoint is rated “M” for Mature by the Entertainment Software Rating Board (ESRB) and is intended for players 17 years or older.