The Blurred Lines of Miley Cyrus

Miley Cyrus is certainly making a new name for herself, one that's controversial and not as sweet and innocent as her former Hannah Montana image. 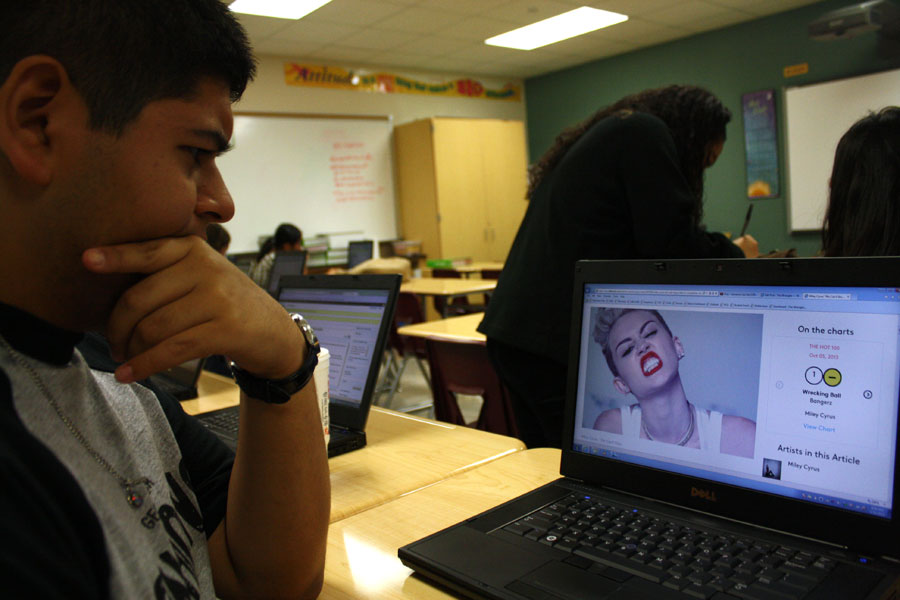 And with that, the insanely catchy beat that gets stuck in your head launches into a jam featuring an array of rhythms that drives a groove in your feet.

It’s the song of the summer; you can’t turn on the radio without hearing it.

It’s a song about a supposed “good girl”, who perhaps won’t be such a good girl for long. It’s Robin Thicke’s “Blurred Lines”.

Contrary to the lyrics of Robin Thicke’s song, Miley Cyrus is not, in fact, a good girl. Not anymore, at least.

Perhaps it’s fitting that Cyrus was the one on stage with Thicke at the VMAs. It makes sense; she’s always had the best of both worlds since she landed the infamous Hannah Montana role on TV giant, Disney Channel. She’s danced, sang, and cowgirled her way into the hearts and admiration of America’s young girls. Her face appears on all kinds of apparel and novelty items; she even had a line of clothing run at Wal-Mart.

She told Bazaar Magazine that it simply wasn’t what she wanted.

As Cyrus grew up, she discarded her innocent Disney-girl persona as easily as the Wal-Mart line.

After a couple of racy photo incidents in 2010, she posted a photo of herself with a daring new haircut: a choppy pixie cut bleached blonde in early 2013.

But then that “good girl” with a daring new haircut performed at the VMAs, dressed in only a tan bathing suit-like outfit that covered barely the basics, twerking on Robin Thicke with her tongue hanging out of her mouth, running a foam finger up her body.

That “good girl” wouldn’t have allowed herself to be made the center of a storm of controversy and shielded from the eyes of the same kids who used to look up to her for the sake of the spotlight. If she were still that good girl, she wouldn’t be crucified by society for doing the same things Madonna, Britney Spears and countless others in the same limelight have done or are doing simply because of her good girl beginnings.

And she’s not making any effort to improve her bold new image.

If anything, it’s only getting worse.

Not long after the VMAs, her music video for one of the new songs on her newly released album “Bangerz” hit the internet. Once again, Cyrus was at the center of conversation for her controversial “Wrecking Ball” video, where she appeared either scantily clothed or not at all. The point of the song was to express vulnerability — and Cyrus’ form of expression was complete on-camera nuditiy.

So what exactly happened to Miley Cyrus to cause her complete 180 transformation? This is the question that a lot of people have been asking themselves. Even so, there are teenagers who still support her.

“I like her,” senior Kelsey Haass says. “[I] think it’s awesome for doing what she wants and not caring what people think about her.”

Cyrus definitely doesn’t care. She spends most of her time justifying her actions with a careless attitude about what other people think about her. She even sings about it in her hit single “We Can’t Stop”.

Seniors Morgan Glose and Austin Vaughn don’t think her bold actions are justifiable with Cyrus’ apathetic attitude. As a child star, she’s grown up in the spotlight, but Glose thinks that she’s doing all these crazy things like swinging in the nude on a wrecking ball and twerking on Robin Thicke live on television “for the wrong reasons”: attention, not art.

“She’s a selfish young woman with no sense of boundaries. She wants attention and she’s getting it,” senior Austin Vaughn says in agreement.

Attention – good or bad – is certainly what Cyrus is getting a surplus of these days, regardless of how you see her blurred moral lines.