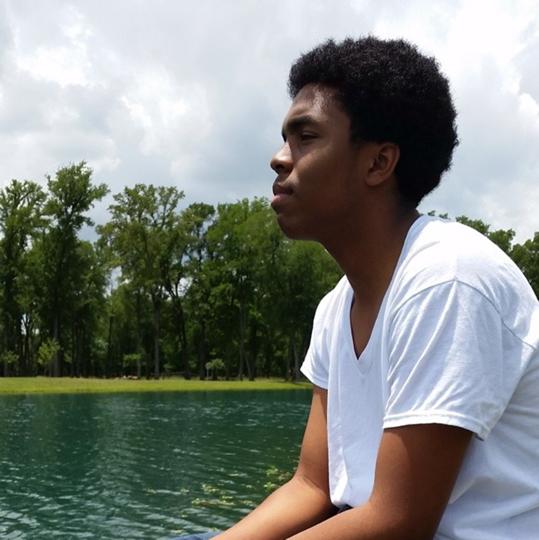 The Wrangler sat down with senior Jonathan Butler to talk about his hometown of San Antonio and the differences he’s noticed at George Ranch.

The Wrangler: How long have you been going to George Ranch?
Jonathan: I’ve been at George Ranch about a year. I moved in late December or early December last year.

The Wrangler: Where did you move from?
Jonathan: I moved from San Antonio, Texas.

The Wrangler: What are some differences that you noticed between San Antonio and the Houston area?
Jonathan: Well, right off the bat, here at George Ranch and the city in general, it’s a lot more diverse here. And it’s the first time I’ve been in a city bigger than San Antonio. It’s kind of different. San Antonio is just a little more cultured – a lot of fiestas and people just party for no reason.

The Wrangler: What do you like about San Antonio?
Jonathan: I just like how it doesn’t have to be like a holiday or a special occasion for there to be like a random party thrown. It’s really fun. It’s a very loud city … it’s very festive.

The Wrangler:  Do you have any stories of crazy stuff that happened there that would never happen around here?
Jonathan: It might not ever happen because the rockets might never make it to the finals. When the Spurs lost in 2012, I was downtown – I think it was game five. And there was a riot that happened right when LeBron hit some ending shot, and everybody just went crazy. And I was with my friends. And KSAT, the news station, was down there and they were just getting everybody. The cops came, the fire department came – there was a fire in some restaurant. It was crazy. It felt like Project X.

The Wrangler: Where was this?
Jonathan: It was right in from of the River Center Mall on one of the side exits on the River walk.

The Wrangler: What is the difference between the people in San Antonio and here?
Jonathan: People are a lot friendlier here. They’re a lot less introverted here. I made a lot of friends easier than I would have anywhere else.

The Wrangler: What are some things that you can do here that you weren’t able to do in San Antonio?
Jonathan: Oh, that’s a good question. Uhh … wear my reveling cop uniform to school. Uhh … I can criticize the sports team here without like dying so I think that’s pretty cool.

The Wrangler: A lot of people see you and think, “oh that’s that dude with the big afro?”
Jonathan: Ya, that me!

The Wrangler: What do you think that label does to you?
Jonathan: I think it’s pretty cool. It’s unique. I think there is one other person his name is Jared.  He’s the tall black guy with the big afro. I’m pretty unique. I’ll be in Kroger at work and people are like, “Aye Afro.” I’m like, “That’s me.”

The Wrangler: You told me earlier that music is one of your passions. What kind do you identify with?
Jonathan: Well, that 2014 Forest Hill Drive – it’s flame. It’s so relatable. I like how the story telling is good. It kind of reminds me of good kid, m.A.A.d city, but more relatable with me.

The Wrangler: How does it resonate with you? What part of the album resonates with you?
Jonathan: Well, I grew up in a pretty bad neighborhood in San Antonio. And I’ve seen that – kind of how J Cole talks about in the song Adolescence, where he talks about leaving his friend behind because his friends  are going to stay and do crimes to support themselves and Cole is going to College. And that hit me.

The Wrangler: So, you have the same story. You left a bad neighborhood in San Antonio. You moved to Houston to get an opportunity to go to college and the people you grew up with didn’t?
Jonathan: Exactly, and that what really hit. That right there, right there.

The Wrangler: So thinking back to that neighborhood. Would you see this as a second chance? A second chance like getting away from that situation and having a chance at life?
Jonathan: Yes, its a lot different here.

The Wrangler: Can you tell me some of the things that happened in that situation?
Jonathan: It’s just pretty much … I remember I had a friend and he was really big into basketball, so I would record. He had a camera and I would help record him playing basketball. I remember we were inside getting a drink before we went out there. And right as we opened the screen door we see these guys and this Sedan pull up. They were literally shooting an assault rifle at people four houses down, and it scared me. My dad’s like, ‘Get in the house.’ And it was crazy. Like this happened. It was the craziest thing I’ve ever seen. There was a drive by when I was in elementary school, and they shot up the people next to me. I don’t even know why, and there were bullet holes on our car. Dang. It was crazy.

The Wrangler: What did you do in those situations – what were you thinking?
Jonathan: I was just thinking like ‘Wow’. How angry do you have to be to attempt to take someone’s life – especially with an assault rifle? That’s like crazy. When they shot up the people next to me, I was asleep so.
The Wrangler: You slept through a drive by shooting?
Jonathan: I slept through it. I remember it was like four A.M and my dad just grabbed me like, ‘Hey you alright?’ Because I was asleep. He pulled me up and I’m like, ‘what’s going on’. I heard police sirens and ambulances. It was pretty crazy.

The Wrangler: Beside what you were thinking? What did you do in these situations?
Jonathan: I remember I went to go ask like, ‘Hey, whats going on?’ I was really thankful that my family wasn’t those types of people who had to have conflict with anyone.

The Wrangler: Do you think that your family kind of guarded you in that situation?
Jonathan: Yes, I really think my parents. My mother especially. My mother’s the biggest influence on my life. She’s a lot like me. She’s really guided me from learning right and wrong and kept me inside reading books or playing video games instead of going to play with kids outside because they were bad influences. She’s really what I have to be thankful for because she shielded me away from that type of life.

The Wrangler: You make a lot of jokes and you laugh a lot. Do you feel like sometimes you make a joke to avoid the conflict?
Jonathan: Yeah, I think there are times where I’m really serous, but laughter is … I feel it can fix most situations. Like, I avoided a ticket one time. I was out past curfew. I told this really bad joke to the cop. I don’t remember what it was, but I was downtown in San Antonio. He dropped me off at home. He said you’re funny and that’s the reason I didn’t call your parents. Laughter is good.