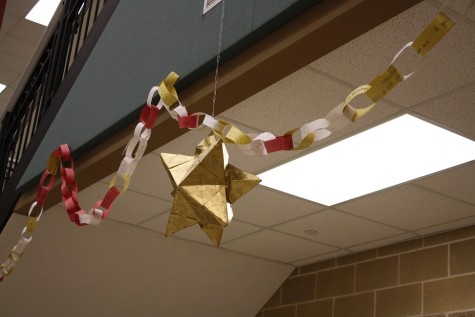 Megan Perrin
Walking through the school at a leisurely pace, my footprints echo in the silent back halls. Distracted by thoughts of upcoming quizzes and to-dos, even my friends greetings aren’t enough to break my concentration. Facts and dates flutter across my mind, and I narrowly miss a head on collision with a fellow day dreamer. I had the art of cramming to perfection. Nothing can deter-
“I have a theory,-” stutter.
“Of compassion,” trip.
“A chain reaction,” flinch. And there goes that.

New freshmen may hear this tune, maybe even enjoy it, but those of us who have been here longer, we know. We know that song will be played enough to be ingrained in our long term memory. It is the theme song of our nightmares. It’s Rachel’s challenge theme music, and it haunts us.

The idea that the song would be stuck in my head all day, replacing my earlier cramming, torments me. No longer is Jewel, a southern belle of country music with charming accents, instead her voice resembles shrieks that pierce my ears. Lovers of rap feel like they are struck with a fatal wound when hearing the rhymes–yet it’s not because we’re reliving a tragedy.

We don’t think of the tormentors who killed the students at Columbine, or the shrieks of panicked kids, the piercing of a bullet through a body, or the fatal wounds that took twelve students’ and one teacher’s lives. Instead of being somber for the futures who were gunned down, we’re annoyed that the same songs kept being replayed over and over again.

Rachel’s Challenge was meant to spread kindness and awareness of what bullying can do and repress those negative outcomes. I remember balling as a freshman after seeing real footage of real kids killing other real kids. And that first week the music played, I felt somewhat soothed. The idea that popular singers like Jewel, who volunteered their voices to spread a message that could inspire others to be more kind, was heartwarming. But then they played it for the next period, the next day, next week, the next year. And that original feeling that warmed my heart was gone and left it cold. This is the first year since the three years of promoting Rachel’s Challenge that our school has stopped using the program. The music continues to play, but the story to why will not be told. And several people have mixed feelings.

When I interviewed two seniors, they had been freshman when Rachel’s Challenge was introduced, I asked them to say the first thing that came to mind when they heard “Rachel’s Challenge”.
“Kindness, chain reaction, love,” Briana Adams said .
“Assembly. Lecture,” Shelbi Mangel said .

I asked them the same question except this time whenever they heard “Rachel’s Challenge Music”.
“I wanna kill somebody. You should petition against the songs,” Adams said .
“Get my earbuds and listen to my own music. Annoyment… Frustration. I hate that music. It’s not fun,”  Mangel said.

How sad is it that our feelings for the music override that of a campaign to end bullying. What should remind us of a girl whose life was short but dreams had impact, instead reminds us to bring headphones more often. We overused the songs and forgot the message.

The music haunts us- but it’s not for the right reasons.