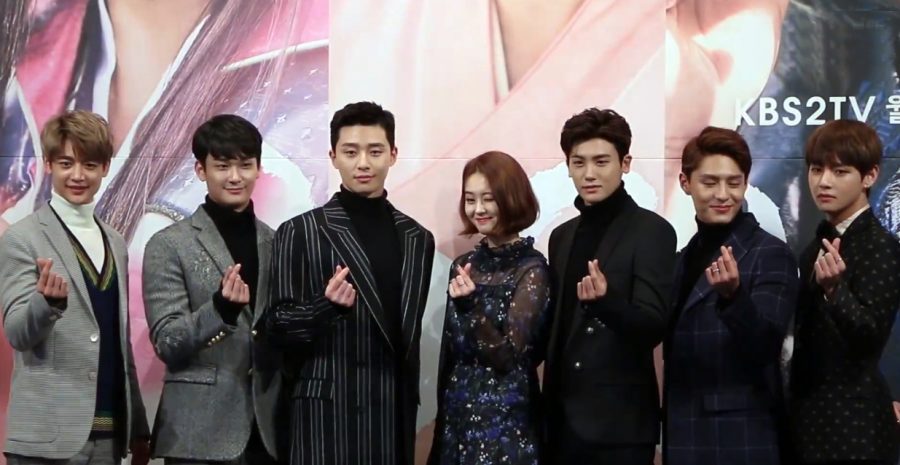 The cast of Hwarang, consisting of numerous famous idols and actors, pose for heart picture at a conference.

The average American watches over seven hours of television everyday according to the Atlantic. Now, a new genre is opening up to many viewers called K-dramas.

The Korean entertainment industry is flourishing now with the increasing popularity of Korean media. This Korean Wave, also called Hallyu, was kick-started by the phenomenon that is Boys Over Flowers. The drama depicts Geum Jan-di, an average girl, who becomes entangled in the lives of the nation’s elite while attending a prestigious private school. The unprecedented success of this drama caused an immense increase in interest regarding Korean culture and is credited as a major proponent for the current popularity of Korean culture.

“Korean dramas are just as well known throughout Asia as its music for its interesting plots and tear-jerking angst,” Chen said.

The drama was made available on many leading streaming sites such as Viki, Netflix, and Hulu, allowing countless Americans to gain their first experience of Korean television culture. The drama exposes the viewer to a myriad of common tropes in K-dramas such as all girls wanting bad boys, being a tsundere, showing love through anger, and a lover becoming amnesiac.

The drama opened the doors of Korean television to the world, and many longtime viewers of K-dramas cite Boys over Flowers as the show that prompted them to get into the genre. Even now, the tropes that made Boys over Flowers popular can be easily identified in many modern K-dramas. American broadcasting networks have noticed the popularity in this market and have started to remake popular Korean shows like The Masked Singer  and The Good Doctor.

The market is becoming more vast and varied as American companies begin to make their own Asian dramas such as Hymn of Death and Miss in Kiss. This acceptance by conventional broadcasting companies is making the once unorthodox genre an accepted part of American media.