Lina Mourad, a sophomore at Cinco Ranch High School, is here at Conference for the first time. 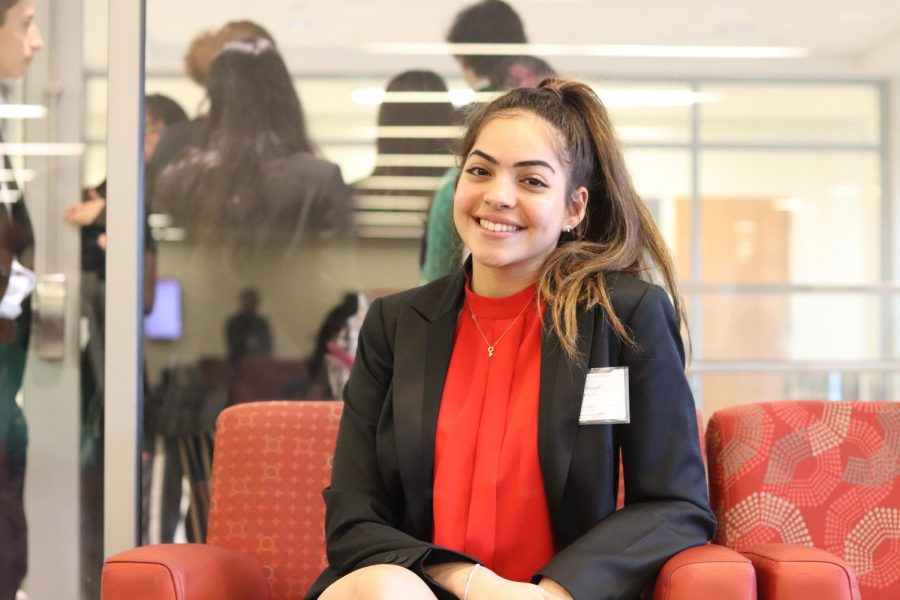 Lina stops for a quick picture on her way to lunch after Session Four of Conference.

It’s the end of the day.

Resolutions are being turned in.

The session has been lively and enjoyable—not too competitive or serious, thankfully. All the students are supportive, kind, and open to hearing opinions. The Chair continuously cracking jokes also helps to ease the stress of a first timer like Lina Mourad, from Cinco Ranch High School Model UN.

Mourad decided to join MUN due to a fascination with learning about different countries and cultures. She’s traveled a lot globally and speaks several languages, so a club like this was the perfect fit.

Her topic is addressing education barriers in the Middle East.

She was prepared, she was excited, and yet she was silent the whole way through.

“Would I have to talk? Would they call me out if I don’t stand up?”

Mourad had been wondering this at the beginning; another reason she joined MUN was to be a better public speaker. Turns out, she didn’t. The speakers were very understanding and didn’t put too much pressure on anyone to speak.

Despite not being as involved as she planned to be, there was no disappointment. There’s no reason for it. It’s the first day of her first year, she can afford to not be too hard on herself. What matters is that she’s put the work in, she’s witnessed what goes on, and she’s gained confidence in her abilities.

Mourad still wants to speak up and state her opinion.

She was more than ready now.