Okay, so hypothetically speaking, we've picked the topic. Now as we're writing, what are some specific mistakes we should avoid? 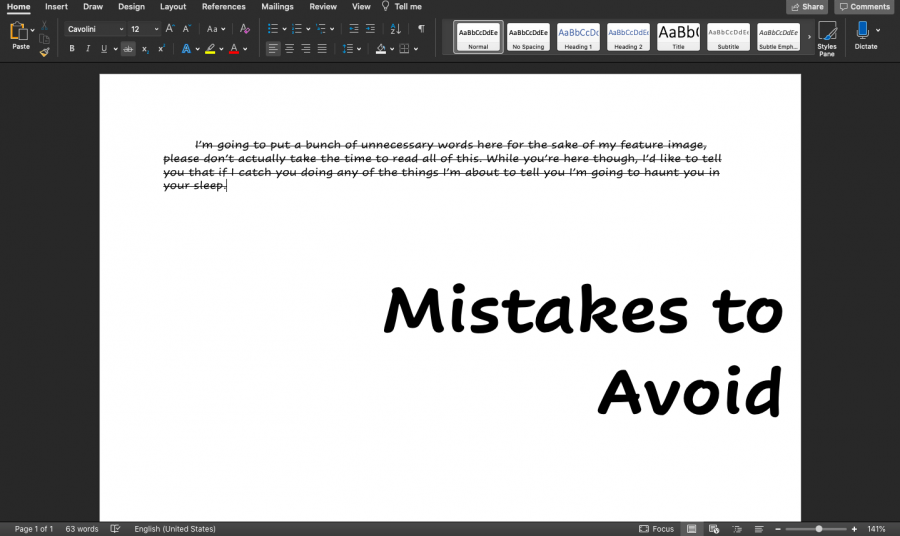 14 Common mistakes to Avoid When Writing Your Essay

These aren’t in order of importance; however, I’ll place a certain amount of “*”s next to the mistake depending on how much of a no it is.

Especially if it’s for self-reflection. This will probably be the #1 topic used in America for 2021 applicants, I promise you won’t be unique at all.

Furthermore, there are so many people who probably have it so much worse (and if you are one of those people, it’s not the best topic to choose unless there’s a positive change that comes from your hardship).

There are many other topics to choose from. Avoid this at all costs.

2. Don’t add a meaningless metaphor just for the sake of adding one, and make sure it’s not cliché*

Don’t bring out some complex metaphor in the introduction of your essay… and then never elaborate on it or bring it back until your last two sentences.

This comes off as forced, like you’re just throwing things out there to make your essay more interesting. It’s really irritating to the readers. If you’re going to use one, it needs to be significant and able to be integrated throughout your essay.

You should also make sure it isn’t cliché. The metaphor should be personal to you, don’t just use one because it sounds good, especially not the common ones. Go google “unique metaphors” if you have to.

This means sentences like, “This taught me…” or “I learned…”. Don’t just tell them about it, you need to show them through the writing in your essay. If you need to use this to get your point across, then your essay probably isn’t personal enough.

If you’re using a personal transformation narrative, don’t say “I changed” and leave it at that. It isn’t believable that you just became better overnight. Explain the process of how you went from point A to point B.

Side note: The catalyst should be you. Your essay should come down to you being the source of your personal change! Don’t just say, “My fish died. It caused a change in me and that’s why I’m so organized.” Um.. how did we get there?

“My fish died because I was irresponsible, and I made the decision to be more organized so something like that never happens again.”

Ooh, okay. (Please don’t talk about how your fish dying made you more organized… I mean unless your fish actually died, my condolences.)

DO NOT. AT ALL. EVER. This is your college essay, for you. To get you into college. You. Have I said you enough?

Do not spend half of your essay talking about someone, some place, some thing that isn’t you. I get your mom is amazing, but admissions officers don’t care about them. Tell them about how amazing you are, you’re the one that has to attend!

Be narcissistic, it’s okay this one time. Nobody besides you should get more than 3 sentences.

6. Don’t use descriptions and adverbs excessively***

I promise it won’t make your essay sound more “college-like”, or intelligent. It’s just weird, honestly. They don’t say anything more about you, they’re just fillers.

Be descriptive when you feel it’s important, for sure. When they’re needed, they’re really needed. But if you’re eating breakfast, just say that. No one needs to know that you hungrily ate the crisp sourdough bread.

Every sentence should be essential, and bring something new to your essay. Don’t say it again in a new way for the sake of being “descriptive”.

Don’t repeat the last sentence of the previous paragraph as a transition either! You don’t need to connect your paragraphs like a high school English essay.

Side note: I’m not saying bring something new as in multiple ideas. There is such a thing as introducing too many different ideas into your essay. It isn’t about how many you have, it’s about how well you develop them and connect with the readers.

A common habit of students is to overuse rhetorical questions. They’re a waste of words and deflects the focus of essay away from you. They tell admissions officers nothing more about you as a person.

There is a 1% though! If the quote you want to use isn’t that widely used, means something to you, and meant something to you before you started this essay, go for it. Just make sure you truly integrate it into your essay and make it known that it’s important to you.

Let me start by saying it is okay to have a personal identity that is tied to a religion. I have nothing against anybody for anything, if who/what you worship makes you happy, then I’m happy too!

However, trying to tell Admissions that “God opened my eyes and allowed me to see how I was treating people, so I changed” will not work out well for you.

If you so choose to take this path, which is already risky might I add, do not word it in a way that revolves entirely around your God(s, prophets, etc.). Everyone does not share your beliefs, remember that.

12. Talking about things you haven’t done yet***

If you’re currently failing three classes, have no motivation or happiness, and/or just making a whole bunch of mistakes in life… Please don’t tell your school. Especially not to say that you’re going to “get better with time”, or “work on it in the future”.

Admissions is not your therapist, putting all your cards on the table in this way does not make you look more honest and genuine. All anyone will think is “Why didn’t you make these changes earlier? Why aren’t you already improving?”

They’re looking for how you will contribute to the school, and this will likely reflect poorly on you.

I.e., ‘contrary to popular belief,’ and then proceed to talk about something no one actually believes. It’s unnecessary.

There’s not much to say about this one, it’s simply not built for a college application essay because it’s not very professional.