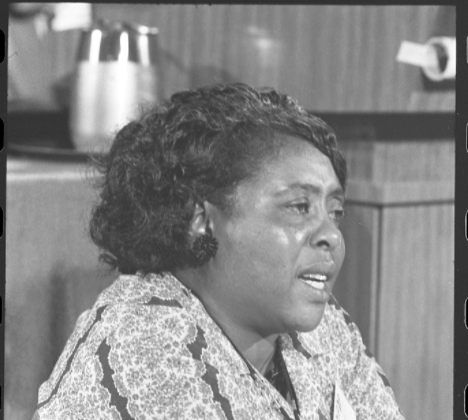 Fannie Lou Hamer Speaks at the Democratic National Convention in 1964.

While many remember Martin Luther King Jr., Fannie Lou Hamer was also a great influence in the Civil Rights Movement.

Fannie Lou Hamer was born October 6, 1917, to sharecroppers Lou Ella and James Townsend in Montgomery County, Mississippi, and was their twentieth and last-child. Hamer grew up in a world connected to sharecropping. After marrying Perry Hamer in 1944 she and her husband worked on a plantation owned by B.D Marlowe and was also the plantation timekeeper since she was the only worker who could read or write.

In 1961, Hamer went in for minor surgery of the removal of a fibroid, yet without her consent, she was given a hysterectomy, known as the Mississippi appendectomy. At North Sunflower County Hospital, where Hamer received her surgery she believed, “about six out of the 10 Negro women that go to the hospital are sterilized with the tubes tied.”

Yet, this did not stop Hamer. She became active in helping African Americans to register to vote as well as herself. She risked her life and was even jailed for trying to register.

In 1962, Hamer and 17 others traveled to the county courthouse to try to register to vote. She was taken for a literacy test but failed after not being able to interrupt the “de facto” laws of the Mississippi constitution. It was a fight for her right to vote as the plantation owner disapproved of her wanting to register. He told her that she had to withdraw her registration or she would have to leave the plantation.

She was later fired from her job at the plantation the same day.

Is this America, the land of the free and the home of the brave, where we have to sleep with our telephones off the hooks because our lives be threatened daily, because we want to live as decent human beings, in America?”,”

A year later in 1963, after attending a voter registration workshop, she and a few others were kicked off the bus and later arrested. Just because of the color of their skin. While she was jailed she was beaten by two black men.

In her testimony before the Credentials Committee at the Democratic National Convention in August 1964, Hamer stated “I stepped off of the bus to see what was happening and somebody screamed from the car that the five workers was in and said, “Get that one there.” When I went to get in the car when the man told me I was under arrest, he kicked me.”

Hamer and others were chastised all because they wanted to register and be seen and treated as first-class citizens.

In 1964, she ran for congress for the Missippi Freedom Democratic Party, which she helped to found, and ran against Democratic incumbent Jamie L. Whitten. She wanted to show people that an African American could run for office.

Hamer also spoke at the 1964 Democratic National Convention describing what she endured to vote.

“All of this is on account of we want to register, to become first-class citizens. And if the Freedom Democratic Party is not seated now, I question America,” Hamer said. “Is this America, the land of the free and the home of the brave, where we have to sleep with our telephones off the hooks because our lives be threatened daily, because we want to live as decent human beings, in America?” Hamer said.

President Lyndon B. Johnson was afraid of her appeal as he needed the support of Southern Democrats to win reelection. He also stated he would not let that illiterate woman [Hamer] speak on the floor of the Democratic convention and attempted to block her testimony.

Later Johnson offered two seats for the Missippi Freedom Democratic Party, yet intentionally none were offered to Hamer therefore the party refused the offer.

Fannie Lou Hamer continued to work in the Civil Rights Movement until her death on March 14, 1977. She published “To Praise Our Bridges: An Autobiography” in 1967.